Journey to the Center of the Soul 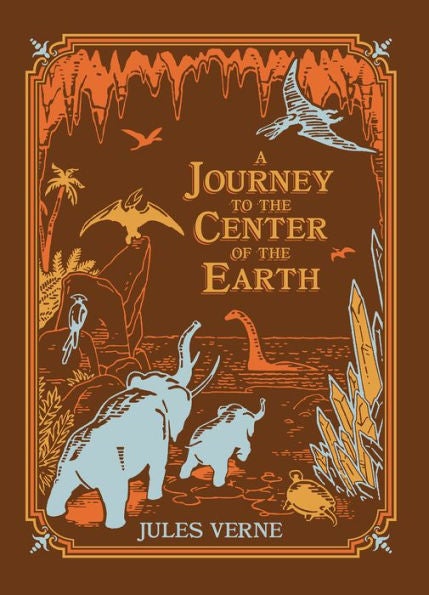 Alchemy can be traced back to the 'chemists' of Hellenistic Egypt who were preoccupied with the purification and transformation of material matter. One theory is that the alchemists were actually writing of the psychedelic experience. The purification of substances was analogous to reintegration of the soul into the self. The alchemist, knowing the risks of openly sharing their knowlege, instead concealed their instructions within allegories where base metals were turned into gold.

The philosopher's stone, created as a result of the alchemical process, is not necessarily a chemical compound, but may, in fact, be an allegory for us, the fully conscious, awake, and whole human. Journey to the Center of the Earth, then, is itself a type of alchemist's codex; the novel is a metaphor for our personal journeys to the depths of our souls. Of course, Jules Verne's novel it is not only this. It can also be read as a plain adventure story. Indeed, this is the magic in Verne's grasp of the alchemical tradition: He hides his deeper themes in plain sight.

Axel, the nephew in Journey to the Center of the Earth, begins his journey by deciphering a code from an icelandic alchemist. Axel, throughout the book, undertakes a hero's journey similar to the journeys traced by many of us wbo are healing from childhood trauma.

Axel is able to crack this code, just as the survivor of abuse must decipher the hidden 'code' of their symptoms. Such 'code' could be anything from psychosomatic illness through to addictions. All of these external clues point the survivor to a deeper meaning hidden within.

In order to excavate childhood trauma, a voyage must be undertaken. This voyage is taken inwardly, back to the original 'volcanic explosions' or inciting traumas. Like a survivor of abuse, Axel is filled with fear, dread and trepidation before beginning his voyage. He tries to find any excuse to not go.

The enduring symbol in Journey to the Center of the Earth is the volcano, Snaefell. It is a treacherous journey to climb this volcano and all very reminiscent of the psychedelic voyage. The volcano is extinct, rendered lifeless and inert. The volcano's state recalls that of a traumatized individual; a person who has lost their life energy.

Axel realizes that if he is to become the person he wants to be, he must enter the volcano and travel to its core; perhaps also the core of the trauma.

On this journey inwards, there are many obstacles in the way of progress. Later in the book, the characters must decide between two avenues. Unfortunately, they pick the one that ends up in a dead end. Likewise, a survivor may feel that no matter how hard they try to reach their trauma, they are continually diverted from it by inner defenses. These defenses numb the survivor's pain by activating different coping mechanisms: Denial; distraction; self-harm; addiction; projection; displacement, to name but a few.

At the most difficult point in Journey to the Center of the Earth, Axel loses touch with his guides: Hans and his uncle Professor Liedenbrock.

In this phase, perhaps 'the dark night of the soul', Axel stumbles around in darkness and seems to get more and more lost the harder he tries to escape. Is this not reminiscent of the most awful hours of trauma, where one feels that one has been left totally alone in the universe? Is it not also reminiscent of the adult's journey back to the wounded child-self, when at times things feel impossibly bleak?

It is at these moments of darkness when Verne's odyssey offers uplifting and triumphant antidotes. At these lost and lonely hours, a solution is always found. Axel is ultimately is reunited with his guides, via his uncle's calling him back to consciousness in the Whispering Gallery. Often, at times of deepest peril, it can be an inner voice or a sign from the universe that calls us back to ourselves. It is often these phases of complete destruction and despair that usher forth new-life during our healing journeys.

Verne's vivid descriptions of his three main characters: Professor Lindenbrock, Hans, and the nephew Axel (who is our narrator) can be viewed as parts of the Self; as components in the fractured internal-landscape of the trauma survivor.

Professor Lindenbrock is the mad-professor or 'teacher' archetype, single-minded in his determination, rationalism and love for knowledge.

Hans is the calm, intelligent guide, who is intuitively aware of his environment and can make skillful decisions to move with nature. He follows the Lao Tse's wu-wei.

The nephew, Axel, is like a child, feeling every emotion with the utmost intensity. Axel fluctuates between extreme-anxiety for the perils of their journey, to being overcome with joy at the beauty of the worlds-within-the-world that the trio encounter.

All three 'part-selves' are familiar to me, having taken many psychedeic voyages. I am most akin to the nephew, Axel, in normal waking life. I am extremely sensitive to my emotions; feeling both the highest highs and the lowest lows. Axel's romantic character is representative of the spirit but, as the spirit has become ungrounded, it is overrun by emotions. It needs the anchoring of body and mind to feel whole.

During a psychedelic voyage, what we experience is profoundly different from normal waking consciousness. Other parts of the personality are activated. Working with psychedelics (particularly LSD) is often a whole-body experience. It enables the body, mind and spirit to become integrated as one. LSD creates interconnection between previously split-off aspects of the self, and reconnects the material realm to the metaphysical.

Professor Lindenbrock, in our psychodynamic map, is the embodiment of the mind. Professor Liedenbrock, when exiting the volcano via a volcanic eruption, maintains the tranquility of a buddah, calmly reassuring his nephew that being carried out of the sulpherous, caustic volcano via molten-lava jetting upwards, is indeed the best thing that could have happened to them.

During journeys with LSD, I have had moments where I have felt like Professor Liedenbrock. Sometimes in my sessions, I would relive the physical and emotional parts of my childhood trauma. These were experiences that were split-off during the abuse. During re-connection of these split-off fragments of experience, I would re-experience the trauma.

It was helpful, in those psychedelic states of recapitulated traumatic-effect, to access the rational mind. This part of my mind remained unperturbed by the extremity of the emotional state (or the 'exit from the volcano'). The 'professor' of my own psyche would soothe me with calm words of reassurance. Thus, I was able to push through to the other side of the erupting trauma fragments. Or, like the three explorers in Verne's brilliant story: I could 'exit the volcano'.

The character of Hans is the final sketch in Verne's mind, spirit, and body triptych. Hans represents the body; the intuitve wisdom and key to unlocking the trauma. A major obstacle that each character must overcome, on their way inwards, is finding water. It seems like all hope is lost, when Hans, listening into the walls, realizes that they are not far from a running stream.

With dexterity, Hans knocks through the wall, allowing gushing water to enter the cavern. Water is the life force. Hans, as representative of the body, shows the trauma survivor the way forward when the mind can't think to know the way.

Intuitvely, the body shakes or makes vital movements to release the pent up energy stored during the abuse. Once, the body has been able to 'speak', a vital life force is reactivated and fills the body with new energy, like the water rushing into the cavern to quench the explorers' thirst.

One of the pivotal moments in Journey to the Center of the Earth is when, after a long wrong turn, Axel and his uncle find themselves back at the shore that they set sail from long ago.

They believe that they have gone round in a circle. However, finding themselves back at the start again, they decide to make the most of their time there and explore the island further. During this exploration they come across skeletons and remnants of previous inhabitants of the island, both human and animal. They find a herd of giant mastadons, and a twelve-foot-tall human.

It is not until the end of the book, when the trio of explorers return home, that Axel makes the discovery that the compass was faulty at the time when they thought they had gone round in a circle. It is discovered that the compass was pointing in the opposite direction to the one which they had believed. Here, I suspect, Jules Verne is letting the reader know that the explorers did reach their destination: The center of the Earth. They were, however, unaware that they had been there.

In that land of the most glorious mysteries, Verne's explorers reached the innermost landscape of the soul. Sometimes, we too are unaware of what we have found during a psychedelic exploration until after the journey. This is the point at which we integrate our experiences by drawing or writing about them.

In a brilliantly titled chapter ('Wonders of the Deep'), Axel falls into a deep dream, where he has terrific visions of the creation of the earth; journeying through many fantastical living creatures; through the ages of vegetation and rock formation. These visions are rapid and electrifying, quite similar to those bursts of information that come during deep inner meditation on psychedelics. Sometimes, we tap into is a mesmerizing, collective layer of knowledge that we are only able to access in these non-ordinary states of consciousness: Our own 'Wonders of the Deep'.

To finish, I would like to draw the reader's attention to Verne's descriptions of the giant mushrooms that his characters encounter in the inner Earth. Is Jules Verne making an oblique reference to the psychedelic effect? Could these mushrooms provide another explanation for the fantastical voyage that erupts across the pages of his novel?

This article originally appeared in Psychedelic Review, Issue Number 12. It was lovingly transcribed by volunteers at The Castalia Foundation in Florida, USA. If you notice any errors or omissions in this article, or have any questions, please let us know via our offical forum, here >>